THE JOURNEY IS OUR DESTINATION

​To say Gwen and I go back a long way is an understatement.  We mis-spent a good portion of our youth dancing to Marvin Gay, the Marvelettes, the Four Tops and the Supremes.  We went to cabarets, danced in blue lite basements, listened to each other's tales of heartbreak, swearings-offs of the opposite sex and attended each other's weddings.  We've been friends for over half a century. 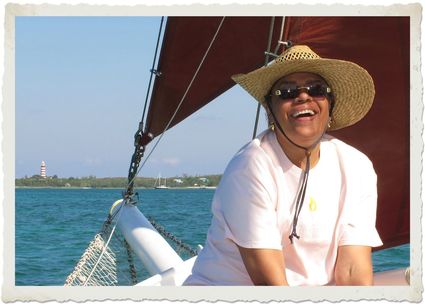 ​Gwen came to visit Teri and I aboard BlueTopaz.  While she'd  been to the Bahamas before, this was her first time cruising in the "Out Islands".    For a week we sailed around picturesque little cays,  shelled on beaches and lounged in the warm Bahamian sun.  This particular day, the three of us spent exploring Hope Town. We climbed the hundred and one steps to the top of the lighthouse; looked out over the harbour, the island and the Atlantic beyond; walked the hibiscus lined streets and laneways and lunched overlooking the harbour.  The close of the day found us back aboard, anchored off the settlement with Hope Town's red and white candy striped lighthouse off the stern.

That evening, Gwen and I were sitting on the coach-roof waiting for the sun to set, when she confided in me that this would be the first time she had actually seen the sun drop below the horizon, i.e., the first time she had actually seen the sun set.  Initially, I was shocked.  How could anyone reach their sixties and not have seen a sunset?  But, on reflection, I realized, Gwen was a city girl, an urbanite, someone who had lived her entire life surrounded by houses and buildings, where the horizon was an urban skyline.  While we sat in quiet anticipation, her expression said she was waiting to hear the hiss and see the water boil as the huge orange ball slid into the sea.

At five o'clock the next morning, I coaxed Gwen out of her berth with the promise of a cup of blueberry tea and a sunrise.  Once again, it was her first.  She sat fascinated, watching a sliver of sun peak over the horizon, then slowly rise out of the sea to sit, like Humpty Dumpty, on the horizon.  I revelled at the sparkle in her eyes and the child like wonder as she experience her first true sunrise.

​Friendship is a living thing that continually surprises.  After more than fifty years, I thought I had seen just about all of Gwen's faces.  But, I'd never seen the pure joy and wonder of her first sunrise.
​ 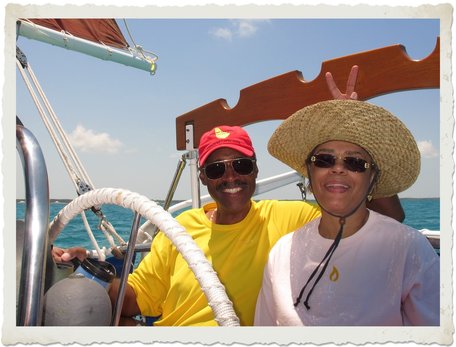 ​
All copy and photographs (with the exception of those in the public domain/or as indicated) on this website are the sole property of Teri L Gilman and Reginald L Hutcherson and are copyrighted all rights reserved 2021. Reproduction or use in any form is prohibited without the express consent of the copyright holders.